In many areas of industrial manufacturing and transportation processes, an increasing heterogeneity of the distribution of goods up to a one piece-workflow is observed. The action of driving and lifting these goods within the production chain plays a central role in optimizing the automated processes and logistics.

Traditional drive and lifting elements are usually designed for the maximum load or the worst case without considering the possibility of a dynamic operation adjustment as a function of the processed good which may have different physical parameters such as dimension, weight, and material. Indeed, a decentralized, adaptive adjustment of the control drive systems makes it possible to optimize the production and/or logistic line in terms of energy consumption, downtime, wearout and cycle times while allowing the processing status to be tracked and estimated in real time. This is one major aspect of the so called industrial revolution 4.0.

Adaptable analog and digital interfaces are integrated in the actuator modules enabling a cost-effective detection of product parameters based on sensors that already exist in the system or that can be integrated easily. Figure 1 shows such an approach, in which the different products (P1, P2) can communicate directly via a bidirectional wireless communication with the intelligent drive units (IAR1, IAR2). Similarly, plant-based information supplied by weighing machines and photocells are covered (IAR3). By transmitting product data and parameters between the workpiece and the drive unit, the developed model-based optimization, control and diagnostic algorithms of the actuators can be easily re-parameterized on-the-fly.

Drive units in conveyors are subjected to high loads and an associated wearout. In order to avoid production downtimes due to sudden and unforeseen defects, the thermal load of these components should be continuously monitored. The nonlinear PTC thermistors implemented in drive units actually only allow emergency detection of a critical operating temperature. Thus, an intelligent processing of the sensor signals for the continuous load monitoring is essential, creating long-term load profiles or generating an early warning information. Thus, the motor itself becomes a sensor of the system.

The recorded PTC curves show relatively similar variations of the PTC resistance versus temperature for all sensors. However, a significant offset shift of up to 20 Ω can be seen at room temperature. Without correction, this corresponds to an equivalent uncertainty of about 20 K.

For further investigations, the industrial partner MSF Vathauer provided a test motor with an associated frequency converter. Based on this test rig, several experiments were made to assess the temperature behavior of various sensors. The evaluation of the sensed parameters happened via a serial interface to the frequency converter as well as by the use of external laboratory measuring devices.

All data have been merged into a specially written measurement software and a measuring concept was developed including the coil resistance of the motor winding as a calibration reference. Thus, an auto calibrated measurement system could be designed that trains the individual calibration curve of an unknown motor sensor during normal operation. Due to the new possibility of precise monitoring of engine temperature without implementing additional sensors in the drives, the partner MSF Vathauer can offer its clients an enormous added value in the field of condition monitoring of equipment with minimal additional cost. 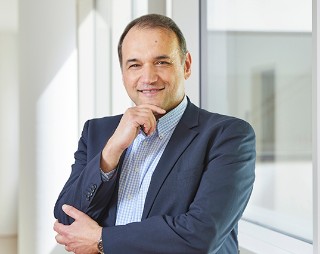